Go!Go! Pixel is a small platforms game that was developed during the Master of creation of videogames I did. I decided to include it into the portfolio because even if it’s one of the first games I was involved with, specially in 3D and being part of a team, it was made using an engine that was made from scratch. Furthermore the feedback and critics from those who played the game were mostly positive despite being short (there’s only one level split in several rooms) and the apparent simplicity, we took care about including a good difficulty curve, procuring to make it easy at first but later it becomes and addictive challenge. There are some details that invites people to play it again.

The game takes place in the realm of Bitland, a 2D world where Piky, a naughty pixel is bored and wants to leave an adventure. Then she thinks about stealing the Poly Emerald, a jewel that it is said that it can grant wishes, to ask it to make him and his friends to have fun. However when he teals the jewel causes a multidimensional accident making everything to be in 3D, additionally wakes up Chucky-Chucky, the guardian of the Poly Emmerald who will chase Piky along the whole temple. During the chasing areas the game switches from 3D to 2D, adapting the player control and vice versa. This way the player can have a better field of view and will be able to anticipate, since there are not many places to stop when Piky is being chased.

The game is available for Windows (from XP to the most recent versions). The download links are listed below, both the installer version and the portable zip file (do not need to install the game).

Self extracting file (without installer)

In order to play the game in case you chosse the zip file, please install everything needed from the redist folder and execute the executable file called “GoGoPixel.exe” from the root. All detailed info is at the README file.

To see the Game Design and Level Design documents just click at their corresponding images or links below.

Go! Go! Pixel was created during a yearly master in creation of videogames. The reason to why I chosed to include it at this portfolio, beyond showing a platforms game, helping to add more genres, it combines both 3D and 2D perspective but also it was made using a game engine that was created by the team too specifically for this game. Furthermore since the narrative is suitable for the whole family and the playability can be a challenge without being exasperating. The game was also selected to be part of the CROMA program from the UAB (Universitat Autònoma de Barcelona).

The team was divided in developers and artists, having the initial steps from the design (both from Game and Level Design) being common to both of the groups. Later, since the develpers from the team were several more than the artists, I combined the programmer role with game design, specially with balancing and level pacing tasts, respecting and taking into account the feedback from the other team members. To see the game design with more detail, please take a look at the Game and Level Design Documents (GDD y LDD). 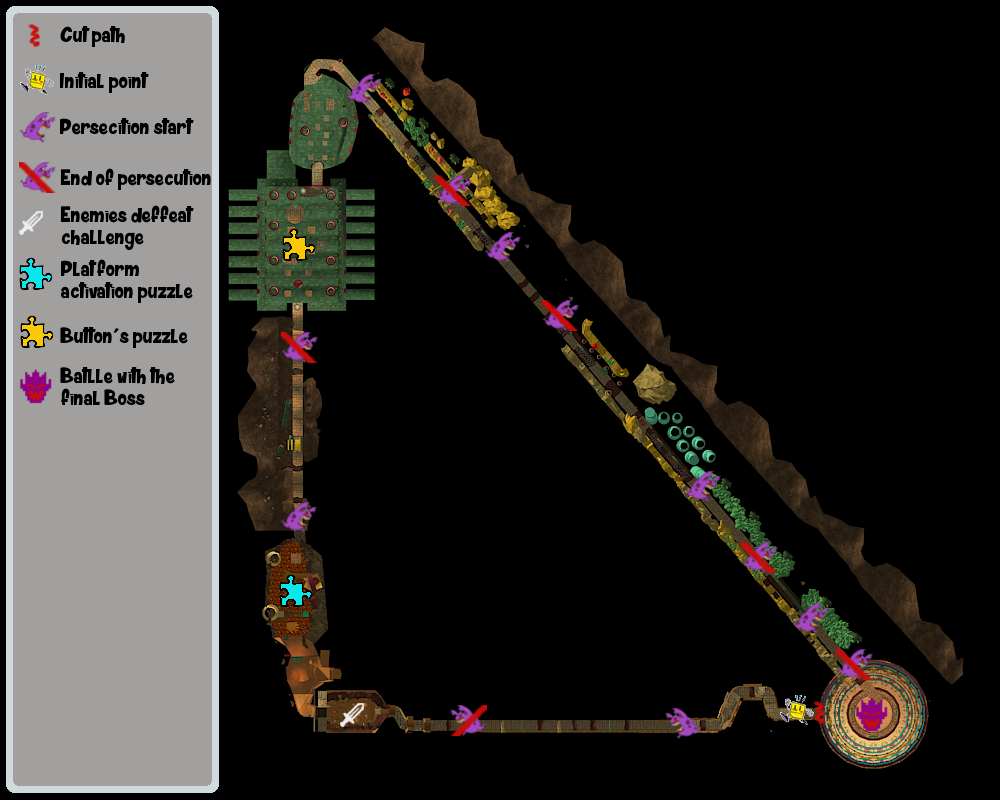 Features related with Game / Level design I was involved in:

We used different programming languages for the development tasks, like C++ for the engine, MaxScript for the exportation tools from 3D Studio Max and Lua for gameplay scripting. Below are some develpment tasks I was involved in .

Samples of challenges in rooms 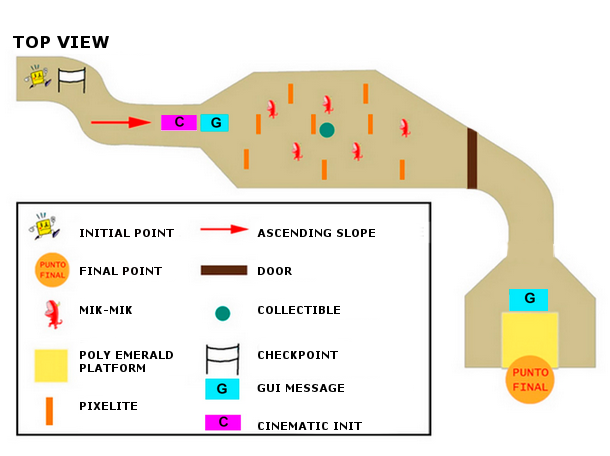 The objective of the room is to arrive at the Finish point and to do that the player must activate the Poly platform, but the door of the corridor is closed and to open it, it will be needed to defeat at least 2 Mik-Miks, additionaly if the player defeats all the enemies in this room, a secret collectible item will appear. 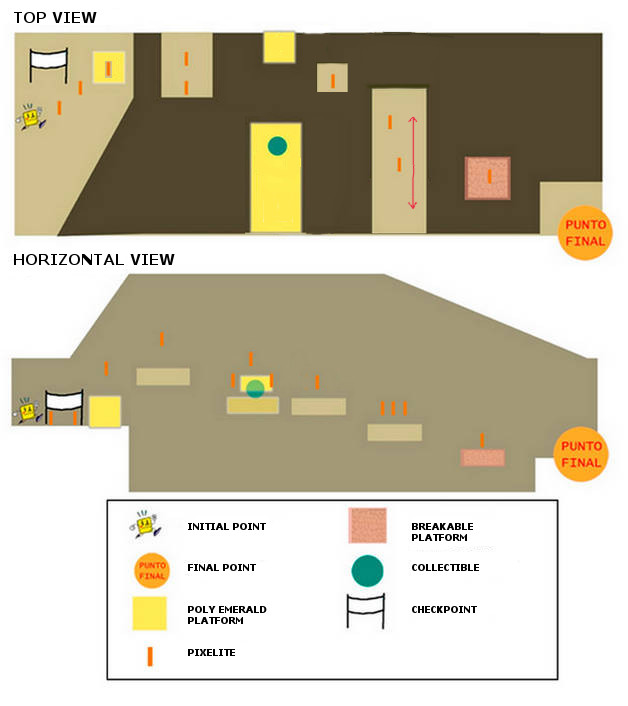 The objective of this area is to arrive at the final point and to di it, player must jump onto the platforms and activating the correct Poly Emerald platforms at the correct time, there’s also a platform that will break once Piky steps on it. To get the collectible it will be needed to activate the corresponding platform. If the player falls to the lava, Piky will lose a life and he will start from the checkpoint. 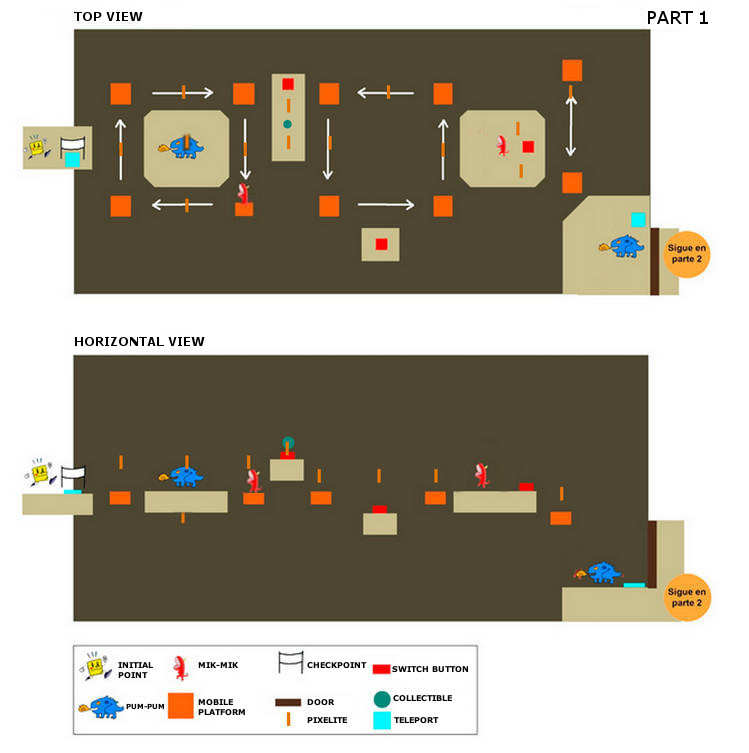 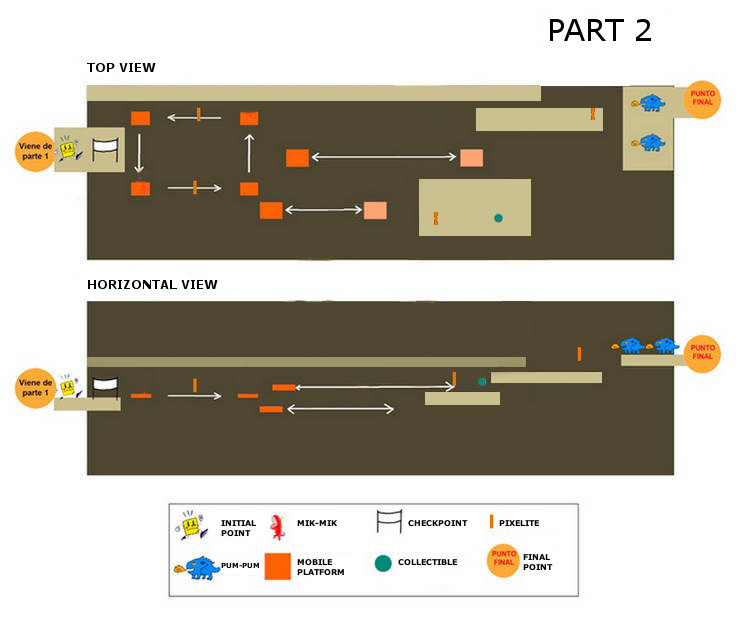 The objective of this area is to go to the finish point at the second half, jumping on the moving platforms when needed. There’s a secret way too accesible from the first group of platforms from the second half, but to get there Piky must open the door at the end of the first half by switching three buttons. Once done not only the door will open but also a collectible item will show up, but to get it Piky will have to enter into the teleport to the start of the room.